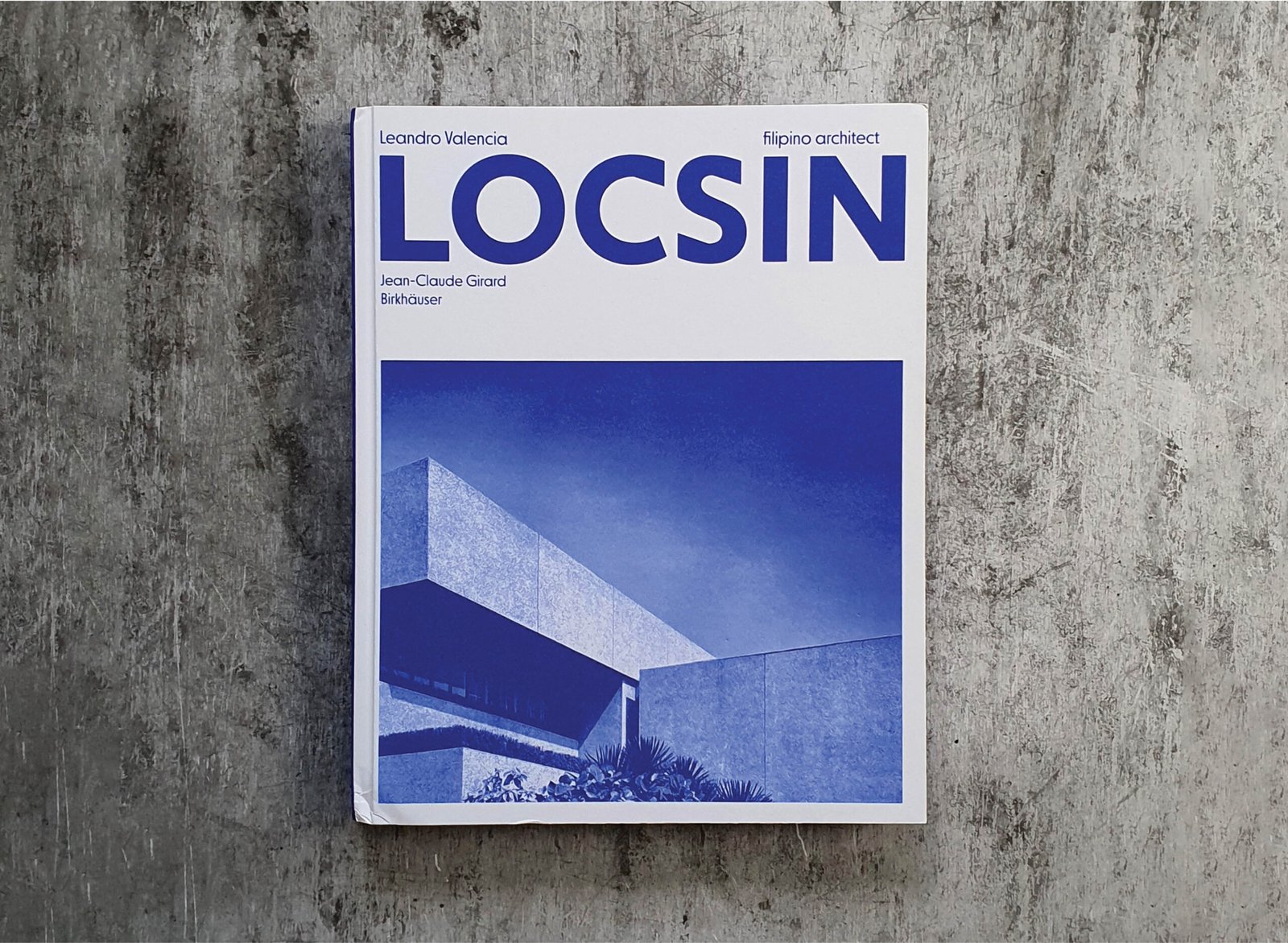 With the release of ‘Leandro Valencia Locsin: Filipino Architect', the elusive, creative mind behind some of the country’s most iconic buildings is unraveled, revealing an authentically Filipino soul

My first encounter with Filipino architect Leandro Locsin was when I discovered the now rare coffee table book on him by Nicholas Polites (Weatherhill, 1977) whilst doing thesis research in the university library. Something clicked when I was pouring through the lush architectural imagery throughout the book, an attraction that pulled me to want to know more about the man whose spaces blurred the lines between sculpture and architecture, and whose chosen medium was humble concrete.

Alas, there wasn’t much to dig up from the library then so I resorted to borrowing the book a couple more times from the Filipiniana section. As the tome cannot be taken out from its room, I pored over the book intensely for hours on end despite already knowing its contents. Come 2012, I finally had my first encounter of a Locsin-penned space, when I made a visit to the CCP National Theater for Cinemalaya. It was a near-religious experience; I nearly forgot the reason I was there and the people I’m with: I touched the concrete surfaces with reverence, and my eyes hungrily devoured the shifting shadows and light play amidst the interior’s sinuous curves.

The journey towards the realization of Leandro Valencia Locsin: Filipino Architect by Jean-Claude Girard (Birkhäuser, 2021) tracked similarly, with the late architect enchanting its foreign viewer with his work and eliciting a desire to know more. For Swiss architect Girard, who decided to do his doctoral thesis on Locsin’s oeuvre, it led to a year-long stay in the Philippines, multiple visits to Locsin works, access to the Locsin archives, and making friends with Neal Oshima, the late Gilda Cordero-Fernando and Carlos Celdran in a bid to know the architect and by extension the country that bore and inspired him. Eager to reveal the fruits of his labor and for the world to finally take notice of this under-the-radar Asian talent, the 600-page thesis metamorphosed into a 300-page monograph, which finally hit shelves last December.

Read: Swiss architect-scholar Jean-Claude Girard parses through the works of Philippine National Artist for Architecture Leandro Locsin and discovers a poet of space with the utmost respect for history and no concern for labels

Not a picture book

Girard curiously started with the Locsin’s last project before his untimely demise, The Aquino Center, and ended the book with an in-depth look at the seminal project that started it all for the then wide-eyed 25-year-old, piano-playing student, the rounded Chapel of the Holy Sacrifice in the University of the Philippines – Diliman.

While the Aquino project (which was left unbuilt) is not as well known, Girard posits that it is emblematic of the themes that were present in Locsin’s body of work. These recurring characteristics: a pursuit of monumentality with a message, the integration of nature, the development of a versatile residential language, climate-responsive design, intimate spatial relationships with land, and the spatial symbiosis of history and culture, serve as the book’s main chapters and the lens by which select Locsin projects are observed and deconstructed. While the jump in timelines and years may seem a bit jarring with the first few chapters, one slowly acclimatizes to how the book is structured; the groupings of buildings with similar characteristics and qualities ultimately validate the themes better as opposed to a chronological discussion.

The book is hefty with information and architectural documentation that were likely to have not been seen by public eyes till now. This is no mere coffee table book that one pores through for imagery. You can do so, of course, but you’ll be privy only to half the book’s overall potential. After Polites, there has not been (to the writer’s mind) another effort to produce a design monograph on the National Artist until now. It does not help that the late architect himself has not left a large body of written work due to his tasking schedule and desire to keep a low profile.

Foreigners reading the book will be pleased to find a comprehensive primer on the Philippines presaging and supporting discussions of the architect’s work, further adding color and nuance to the decisions Locsin made for his spaces as well as unpacking the external factors that contributed to the realization (or cancellation) of projects. Due to the author’s desire to advance a more formal discussion of Locsin and his works, and not to overstep his role as researcher, discussions on external factors like major patrons (the Marcoses and the Ayalas) and the controversial climes that surround some of his better-known works (like the CCP Complex) are brisk and abbreviated. Girard has this to say in a previous interview with regards to this point:

“The Marcos era was undoubtedly a catalyst in Locsin’s work, leading to a high volume of projects and triggering the search for a national identity in architecture. At the same time, I can clearly demonstrate how the ideas that later found form in a large body of his work—from the Cultural Center of the Philippines to the buildings in Los Baños for the University of the Philippines—originated much earlier. He didn’t start working on abstraction or long-span roof coverings because of these opportunities, but no doubt the Marcos era gave him an impetus.

I am an architect and a theorist; my goal is to analyze the work as a whole and place it in a historical perspective. I may have a value judgment on the Marcos era, but to me, the work must also stand alone—as part of the Philippines’ cultural heritage. There are other examples of works of art built during terrible periods of history, such as architecture under fascist regimes. Still, the architects were not always aligned with the regime in question. As I never had the pleasure of meeting Leandro Locsin personally, I cannot attest to his position in relation to the Marcos era.”

“Girard’s portrait of Locsin reveals an architect-artist in constant pursuit of ways to design and create spaces that resonate with climate, culture, and country, a journey that is clear and easy to follow, as he methodically fleshes out and develops the layers that lead to the final image.”

People new to Locsin or non-architect readers will appreciate the relative approachability of the book’s language, whose frank and objective voice helps demystify the architect and his intentions in accessible language; architects and designers will feel right at home reading the book.

The coverage of Locsin as a subject is methodical and formal, “sleuth-like,” as Girard’s one-time thesis adviser Bruno Marchand describes it, an approach that is necessary so as to keep the spotlight solely on the architect. As a result, there is a detached tone about the book, a voice with less of the emotion and value judgment than, say, the outspoken Fr. Winand Klassen, who penned quite an enlightening (and entertaining) chapter on Leandro Locsin for his seminal book Architecture in the Philippines: Filipino Building in a Cross-Cultural Context (University of San Carlos, 1986). Still, this observation is not to disparage the author, whose refreshing candor has also revealed a lot of previously unreleased intel on some Locsin works, coupled with incisive observations.

Girard’s portrait of Locsin reveals an architect-artist in constant pursuit of ways to design and create spaces that resonate with climate, culture, and country, a journey that is clear, legible, and easy to follow, as he methodically fleshes out and develops the layers that lead to the final image. I for one felt a sense of relief; the Locsin I envisioned and admired in my head, the poet of space that both loved his country and opened himself up to innovation and change, is the same one Girard has uncovered.

The wealth of site plans, floor plans, and cross-sections are a delight to behold within the book and whose inclusion is vital to one’s understanding of the author’s points. There is however an observed lack of present-day imagery within the book, which would have made the appreciation of the works even more effective when readers young and old are made to see the structure as built on the page; the absence may be due to a resourcing or timeline issue but can also be read as an object of alarm as a startling number of Locsin works have already met the wrecking ball, with a number currently on the demolition block. The ones which do exist today also run the gamut of conditions, from well-preserved to in poor shape.

The first of many?

The 2020-2021 lockdowns have led to an alarming amount of built heritage demolitions, mostly of post-war modernism. Documentation of these structures is either scant or non-existent; public attention has been muted and largely distracted by the uncertainties of the pandemic, a factor exploited by the lot owners and real estate developers to flatten what they regard as barriers to profit to the ground. As of writing, a prominent Locsin structure along Makati Avenue in Makati City is slated for demolition, the property now fenced in preparation for the wrecking ball.

Girard’s book on Locsin couldn’t have come at a more urgent time for Philippine architecture. If an architect with Locsin’s stature has works who aren’t spared the wrecking ball, what about the works of other equally important but lesser-known architects? It is vital to reconnect the public with our shared heritage as embodied by built spaces, and more books on our architects and their work like Birkhäuser’s new title can only help bridge this awareness gap. •

The reviewer bought his own copy of the book
Copies will soon be available locally via Estante Bookstore and Artbooks.ph