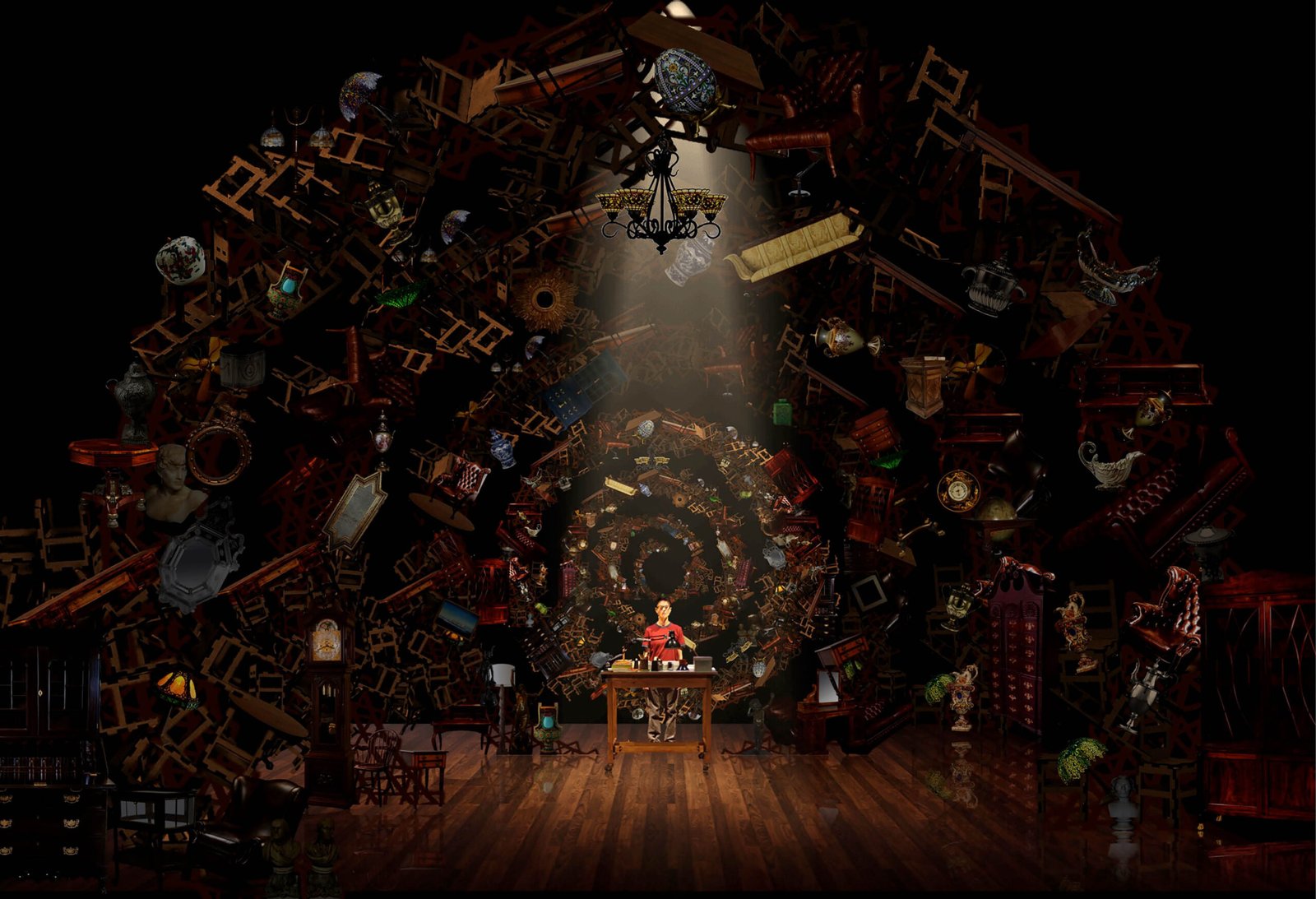 Noted scenographer Faust Peneyra sets the stage for live art, in and out the Philippines

Hello! Do introduce yourself!

How did you end up in the world of theater production and design?

As a child, I’ve always been fascinated with storytelling and spectacle. I was also hyperactive with a few obsessive-compulsive tendencies which got me into trouble more often than I would want to. My parents would buy me Lego bricks to play with, just so I can sit quietly in one corner and build things. During those times, my older sisters were all obsessed with musical theater and they would spend the whole day listening to cast albums. From there, my imagination would run wild and I would start recreating a helicopter for “Miss Saigon” and a chandelier for “Phantom of the Opera”.

Growing up, my interest in theater and liberal arts didn’t wane. I would always be involved in our school productions whether as an actor, a stage designer, or a director. But I think what cemented it for me, the point where I knew I would pursue theater and make a career out of it, was in 1998 when I saw a video of “The Lion King” performance at the Tony Awards on TV. I was astounded by the sheer scale of the production and the vastness of the artist’s imagination in making a live version of this Disney classic with talking animal characters; how Julie Taymor was able to capture the animals’ movements and somehow incorporated it with the actor’s through puppetry and costume and blending it well with the scenic design. That evening I started researching more on her work and it was probably the definitive inspiration that pushed me to continue further on with stage design. To this day, I am still in awe of that production.

Would you say that you have a trademark style or aesthetic in your work?

I can’t say if I have one, but I have heard from colleagues in the industry and critics that they would know immediately if I designed a show when they see the set for the first time. So maybe I do have.

When I conceptualize a design, I always make sure that it would be clean and balanced; that it would be a force in forging the storytelling forward. I want the audiences to be so captivated with the design that they would feel part of the spectacle. I don’t agree with short-changing paying audiences with mediocre designs, whether it is big or small budget productions. There is always room for ingenuity.

Another personal touch would be functionality. I like creating multi-purpose set pieces that would unravel in front of and surprise the audience. My assistants would usually call these my ‘transformers’ set. I know am not the best. but I will always cook up something original (hopefully magical too!)

What are the usual challenges encountered by a set designer/scenographer during production? What are some of the considerations that need to be addressed?

In the Philippines, it’s definitely budget, but it never hindered me creatively. I am very proud to say that I’ve worked with low-budget productions and big-budgeted ones with equal fervor and commitment.

Also, I make considerations on the space/theater I’m working in, the legal restrictions on the materials and theatrical rights owners, and even the collaborators you work with. I tend to gravitate towards directors who share the same ethos, passion, and quirkiness as mine as the collaboration would be beneficial and enjoyable to everyone involved in a project

How does one start a career as a set designer? What design disciplines should a scenographer/set designer be adept in?

Passion for theater and the performing arts would be a priority coupled with a great work ethic.
For design disciplines, I would say visual arts, art history, engineering, architecture, and a little bit of mathematics. It is never easy but a holistic education on the field and the liberal arts would be helpful to their craft.

Also, I have always believed that the best designers are the best researchers. For any designer to create something original or fresh, one needs to know what has been done before and as much as possible not to replicate it. The dramaturgical research assists in creating the design, may it be period or something out of this world. The more you know, the more equipped you will be in tackling a project.

Was there a particular project that served as a turning point in your career?

In 2013, I designed “Piaf”. Nobody knew me back then and it was five years since I left Manila to work in Hong Kong. It was the story of French singer Edith Piaf also known as ‘La Mome’ (the Little Sparrow). I designed a set made of dilapidated French shutter windows that violated the rafters and the height of the RCBC Theater proscenium. I designed the set as a birdcage (symbolically) but added the little surprises like making entrances into doors, windows, shadow screens, and wardrobes.

Another one would be “Bridges of Madison County – The Musical” in 2015. The scenic design is a gallery composed of rustic frames anchored by one central image – that of a tree. The imagery I hoped to have achieved were these fragmented frames of memories pieced together in space and somewhat floating; in Francesca’s eyes, a moment in the past, and in Robert’s, a life that could have been. Creating a world inside a frame, both a dream and reality, underneath a myriad of stars using hundreds of Edison bulbs. These individual frames transform into different set pieces used by the actors like the bed, kitchen, windows, etc. Some of the frames have hidden individual projectors that allow the images to morph into portraits in one of the poignant scenes in the finale. This production is a favorite of mine because it was effective in forging the story forward; challenging the audience’s imagination with all the surprises on the set and it had a very romantic feel with all the scenic elements combined.

I am proud to say I’ve worked with low-budget productions and big-budgeted ones with equal fervor and commitment.

What is your dream gig? Have you landed it yet?

I have always dreamt of designing for operas. I have prepared so many design ideas for different operas so when the opportunity arrives I will be ready. A favorite opera of mine is “Turandot” as I’ve always been fascinated by the architecture of the Forbidden City and Chinese cultural history.

What excites you everyday about your chosen career path?

It would be the storytelling and creation. Every artist would answer the same, but for a designer to create worlds from an idea translated to paper and constructed to reality that will be enjoyed by audiences on stage is an exhilarating job. I have been so blessed with continuous projects locally and internationally because these opportunities allow my design voice to be heard/seen by audiences and if it inspires a couple of people to pursue arts, that is exciting for me.

Who were your artistic idols, and how have they shaped your design choices and aesthetic?

A Filipino designer would be Gino Gonzales. He is the most proficient stage designer continuously working in the industry. He inspired me tremendously and guided me when I was a student at UP.
George Tsypin is my foreign designer hero. He breaks all the rules. He designs with no budget in mind.

What can you say about the state of the Philippine theater industry today? What do you think is needed for it to blossom/continue its growth?

Philippine theater will always thrive because of our love for the performing arts. It is ingrained in our culture and society and even embedded in our education system. There is so much talent in our country, and I am so proud of all the patrons, producers, and directors who give opportunities to all these artists like myself. Our audiences have grown tremendously for the last decade and I am looking forward to the day when Manila will be the next destination for live performances like West End or Broadway.

Having said that, we also need to have more performing arts institutions for training and instilling technique, discipline, and counseling budding artists. Life in art is never easy and we need to support the holistic training of all these artists to become leaders and citizens of our society. •

The story first appeared in the Starters issue