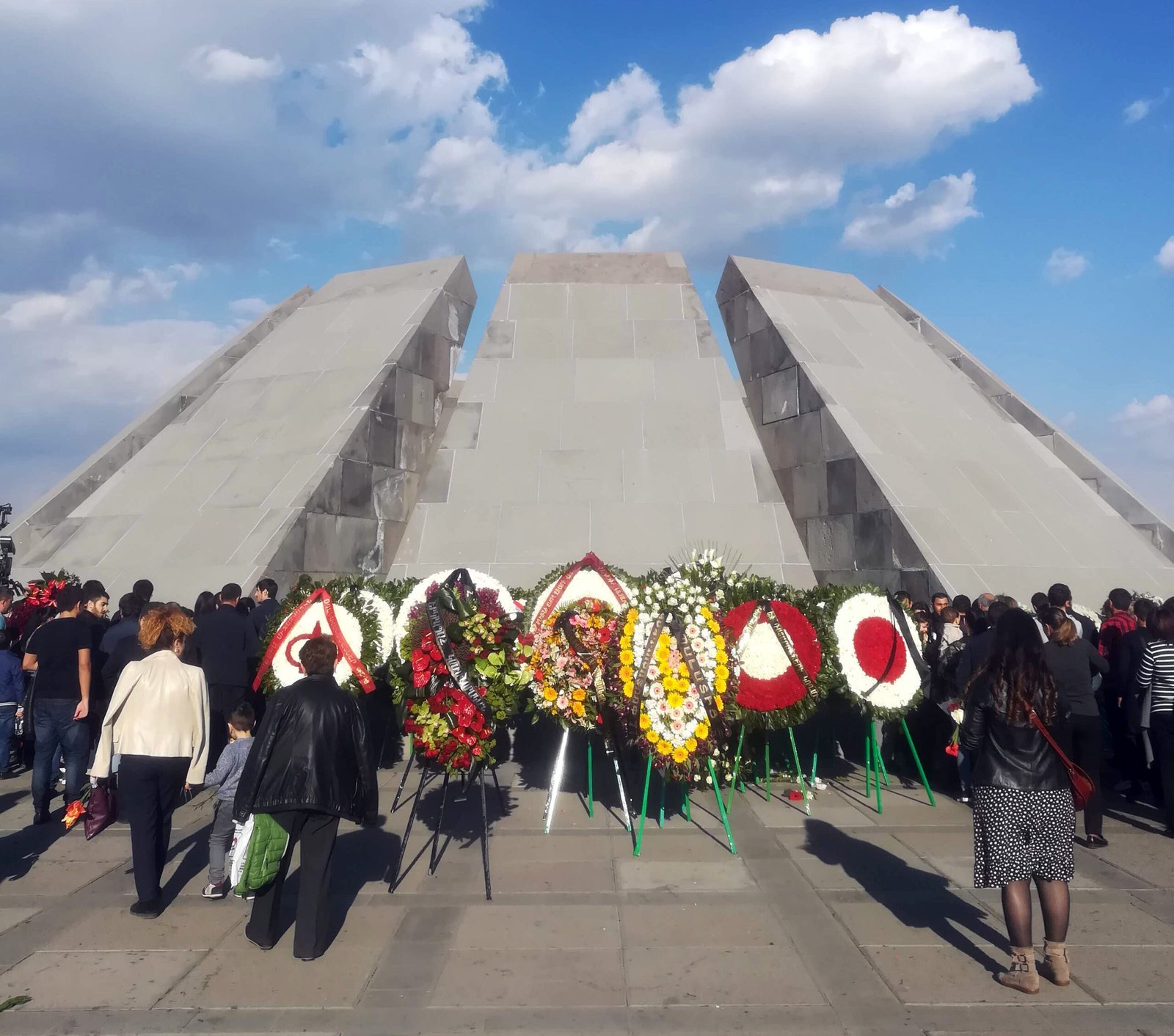 A Dark Day for A Spring Walk

Remembering the Armenian Genocide in the capital city of Yerevan, more than a century later

In Yerevan, at the very heart of Armenia’s capital, the streets were quiet despite it being a lovely, warm spring day. There were fewer cars than one would expect, and even less foot traffic on the sidewalks. Shops and restaurants were closed; only a handful deigned to open, mostly those catering to tourists. If one didn’t check what day it was, one would really start to wonder: where is everyone?

As it happens, I didn’t need to check what day it was, anyway: it was, of course, my birthday. But prior to what was supposed to be a celebratory trip to Armenia, I checked what there was to do in Yerevan on my birthday, only to discover that April 24 meant something far more important. It was the anniversary of the Armenian Genocide.

Exactly 75 years before I was born, the Ottoman government first came for about 250 Armenian intellectuals and community leaders in what was then Constantinople in Turkey, imprisoning them and eventually deporting and assassinating them, one by one. Thus, the genocide began.

Then, they came for the rest. The able-bodied Armenian men, then the women and children, then the elderly. They were outright massacred, subjected to death marches, deprived of food and water, robbed and raped. By the end of 1916, only a couple hundred thousand of the deported Armenians had survived. It was estimated that over a million Armenians were killed. Many chose to flee their homeland in what is now known as the Armenian diaspora, for fear of meeting the same fate.

Over a century later, I find myself among those making the trek to the Armenian Genocide Memorial on Armenian Genocide Remembrance Day. Armenians march to the site not just to memorialize the genocide, but also to call on world leaders to recognize the atrocities as a genocide. Thus, April 24 is not just a remembrance day, but a day for Armenians to fight for justice.

It is quite a long, uphill walk, as the memorial is situated on a hill and the roads leading up to it are closed for the day. I am surrounded by Armenians of all ages – some of them with their families, others with their friends, and still others making it a solitary affair.

This commemoration march occurs every single year, but even as a foreigner, I did not get the impression that it was anything less than a time to reflect and remember the nation’s martyrs. Yet, it was also just a lovely day for a spring walk, and the way to the memorial was lush with trees and greenery. The atmosphere was solemn, but not sorrowful. The air was full of chatter, punctured by an occasional laugh. Children played with each other. A couple of teenagers posed for us when we tried discreetly taking photos. Most held flowers in their hands. Halfway up the memorial, we encountered locals selling flowers on the side of the road, and we bought one.

Finally, we reached the memorial complex. The Armenians are acutely aware of and highly prize the natural wonders and the underrated, preternatural beauty of their land; this I realized after exploring their many beautiful monasteries. If it is of any significance at all, they will pick the best spot for it – whether it was a spectacularly red-orange mountainside, a tranquil lake surrounded by snow-capped mountains, or the very top of a mountain one can only reach via the longest nonstop cable car in the world (and you better believe you’ll have to choose between missing one of the best bird’s-eye views you’ll ever see or your fear of heights).

Indeed, they couldn’t have picked a better spot for the memorial. The first thing one sees was not the memorial, but a panoramic view of the city, with the magnificent Mount Ararat serving as the backdrop – a show of pride I can get behind. The memorial itself was 12 towering slabs of plain concrete leaning over and surrounding, but not closing in on, an eternal flame. Quite a sobering, austere sight, if not for the several feet of flowers piled all around the flame. The chatter has quieted some, in reverence, but a speaker blared out rousing choir music, loud and clear despite the throng. We picked a spot and gingerly set our lone flower upon the massive pile, and we were joined by many, bowing in silent contemplation and making the sign of the cross a few times as they went. Nearby, a stoic-faced man waved the Armenian flag, seemingly tirelessly.

I was never fond of parties. I can’t remember the last time I threw a party on my birthday. Still, marching in solidarity with Armenians to remember their fallen was definitely not how I pictured spending my birthday in Yerevan. But it did make that particular birthday an unforgettable one, even considering that I spent it in a completely new place – in a country straddling two continents, not just geographically but also culturally.  On that birthday and in a chance of a lifetime, I walked the same path as generations of Armenians in more ways than one. It is not the happiest of legacies, but it is perhaps the most valuable: a renaissance, an unbreakable spirit amid cruelty and injustice, an ironclad sense of identity no matter the cost. •

Sibyl Layag Decena is a business news editor most days, a voracious reader when she has the time, and an avid traveler who is waiting patiently for the world to open up again. For now, her days are marked by a perfect new dish to add to her arsenal as a burgeoning home cook and amusing footage of her cat, Moony, which are, sorry to say, for her and her husband’s eyes only. Unless you are interested enough to follow her at her private Instagram account, @sibylldecena.