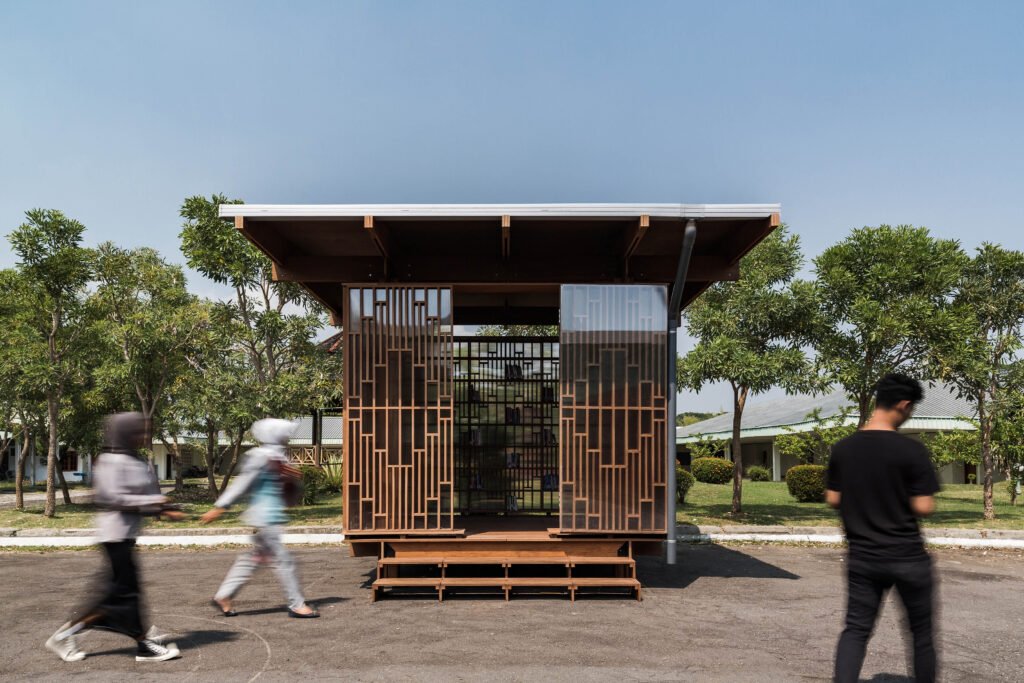 SHAU embarks on their most compact, yet most challenging microlibrary yet: the prefabricated, modular Microlibrary MoKa

Hello Team SHAU! You have created various iterations of your Microlibrary initiative, one of your recent ones, Microlibrary Warak Kayu, even won three highly-commended honors at the WAF. What makes this new addition distinct from all the previous microlibraries?

Florian Heinzelmann and Daliana Suryawinata: The previous microlibraries were uniquely designed for each location with different materials. All of them were designed with socio-climatic aspects in mind which means to make human interaction happen and attractive to people, a comfortable environment must be established as a precondition. Since we design for a tropical climate without the use of air-conditioning, we cannot mitigate bad design decisions with the help of technology and increased usage of energy. Therefore, passive climatic design strategies are the core of our design principles also for the new Microlibrary Moka.

The big difference, however, is that we intend it to be as low cost as possible while using FSC-certified timber products and making it prefabricated to ensure quality with reduced on-site construction work and assembly time and modularity in form of a construction system to again reduce costs but also be able to flexibly react to clients’ needs without having to design a library all over again. In short: the Microlibrary as a product. The premise for that is simply that over the years we looked at how we could scale up the Microlibrary project but realized that Indonesian local governments have a certain budget for direct procurement available without going through a tender process. We specifically designed MoKa to target this market but also smaller Corporate Social Responsibility/CSR programs and hopefully can disseminate Microlibraries to much more places in Indonesia.

The structure’s modularity offers so many possibilities; you said it took two years to conceptualize and deploy this model. What were some of the challenges and hurdles that your team needed to overcome to make the model work?

The Microlibrary MoKa was conceptualized over two years, but not full-time at the beginning. It organically grew into an actual project from three other microlibraries namely Hanging Gardens, Warak Kayu, and Fibonacci. Hanging Gardens was made from in-situ cast concrete and we asked ourselves whether it is possible to do it from timber. Since it is a repetition of the same sized staggered planter boxes, it already had intrinsic modular design qualities. We tinkered with that for a while but at a certain moment let it rest and hoped it becomes applicable for another occasion.

In the meanwhile, we were working on Microlibrary Warak Kayu and the collaboration with PT. Kayu Lapis Indonesia turned out to be quite pleasant and fruitful. After Warak Kayu was realized, we came together to talk about future projects and evaluated Warak Kayu from a construction and manufacturing standpoint and costs, and we felt it being a bit on the pricey side to be attractive for a larger pool of potential clients. We also had Microlibray Fibonacci receiving the silver award at Lafarge-Holcim for Asia Pacific in 2017, but when it went into the next round for the global award competition there was some criticism for the unique design character rather than being a system for mass application. Although we do not agree that everything should be based on a mass-production system only, we came to realize the potential and think that both the unique ones as well as standardized ones could coexist and supplement each other.

Learning from these three Microlibrary projects and having the possibility to work furthermore with PT Kayu Lapis to develop an actual prototype kicked the MoKa project into full motion. We then pulled the timber version of Hanging Gardens out of the drawer again and scraped several aspects. Firstly, the planter boxes. We love to have the plants but waterproofing a green roof within a modular system appeared too risky because application of that would have to happen after assembly on-site. [We also consider] the additional weight of soil, water, and plants which would make the construction more massive and costly. The same goes for having the system being suitable for several floors.

A modular system, which is to be assembled on-site from several prefabricated elements, leads to two choices: Either using a standard size column system which would mean the structural elements would be oversized in case of a single level library only or making a system with differentiated column widths based on different vertical layouts leading to a combinatorial explosion of connectors, beams, etc to be designed but also to be manufactured. Therefore, we decided to offer only a single-level building because this covers anyway the need of most of the potential clients who want to have a high-quality but low-cost product. Once this was settled, we worked with our industry partner and looked into construction aspects and material properties, and dimensions of different timber products and the implications those have on stability, durability, manufacturing simplicity, and costs. Part of the reason the whole venture took two years until the prototype was built is that both we and PT. Kayu Lapis were developing it at our own costs next to our regular paying projects.

Are there plans to share the schemes and system behind the microlibrary with communities so they can create their own? Would you say that this new model is your most cost-effective iteration of the microlibrary?

Honestly, [we haven’t gotten far enough] yet to make an open system of it, also with respect to the fact that we spend a lot of time and effort developing it. We have one prototype at the moment but now the actual work begins to convince potential clients of the product and get orders in and eventually construct more of them. Even if we could share the schemes, one would need a factory, specific timber products, and certain expertise to get it done. You cannot just use some timber and expect the same quality or structural stability. Exactly for that, we offer a system where you can order from us, and you get good quality for a good and fair price while it is delivered and assembled without hassle. Later on, we might want to design a ‘microlibrary creative commons’, one that uses simpler materials and does not require a factory to construct it, so that any community in the tropical region can build them.

You used FSC certified timber for the structure; are there other materials that you considered for the microlibrary? How is the material a good match for the model and its social and climatic surroundings?

There would be other materials like steel too, but timber is a local material with a local industry. A lot of Indonesia’s timber products are for export rather than the domestic market. It is a bit ironic that we would import steel for construction but export other natural resources, especially when those have a better ecological footprint being carbon neutral or even positive where the former product has a massive amount of embodied energy. Looking at vernacular architecture in Southeast Asia, it was always built from timber, bamboo, and rattan. These typologies evolved as a response to the tropical climate in combination with locally available materials having a light construction with large overhanging roofs, cross ventilation shutters, or being houses on stilts. Even if these typologies aren’t that present anymore, Joglo or Limasan timber constructions can be still found in Java. There is a certain cultural and social affinity with it especially since these roofs and building types are used still for cultural purposes like dance performances, etc. We are not copying a certain local style, but we can draw from that, re-interpret it, make it our own, implement contemporary manufacturing methods, and timber appears to be a good choice for that.

What were some of the conscious efforts the studio undertook to assimilate cultural traditions and behavior into this microlibrary? While it is a little easier to create new typologies/structures, it is much harder to tie in a new structure or addition to a community.

With Bima and Warak Kayu being more like houses on stilts (Rumah Panggung), we see and designed them for the potential usage of the semi-outdoor space underneath for other activities than a library, extending the program from a library into a community center. At Bima, they had already a stage which we integrated into the library and the space in front was used by kids for playing football. Due to spatial limitations, we had to raise the library because we did not want to take existing usage away from the community. As a result, they got a shaded and rain-protected stage which enhanced the usability even further.

Furthermore, the space underneath is not only used by the people from the neighborhood for hanging out together but also temporarily for health checkups, etc. With the prefabricated MoKa version,  we scrapped the idea of building that system on several floors, but we still needed a semi-outdoor space due to what we learned from other Microlibraries and their usage. When two basic structural modules are combined, due to the roof overhang dimensions, they form the same size in-between space, meaning by adding two modules a third module space comes for free. In addition, not all of those combined modules in in-between spaces need to be covered with façade elements which then leaves room for having a veranda next to the book storage room. This is how we can react flexibly with the MoKa system to community wishes and needs. •