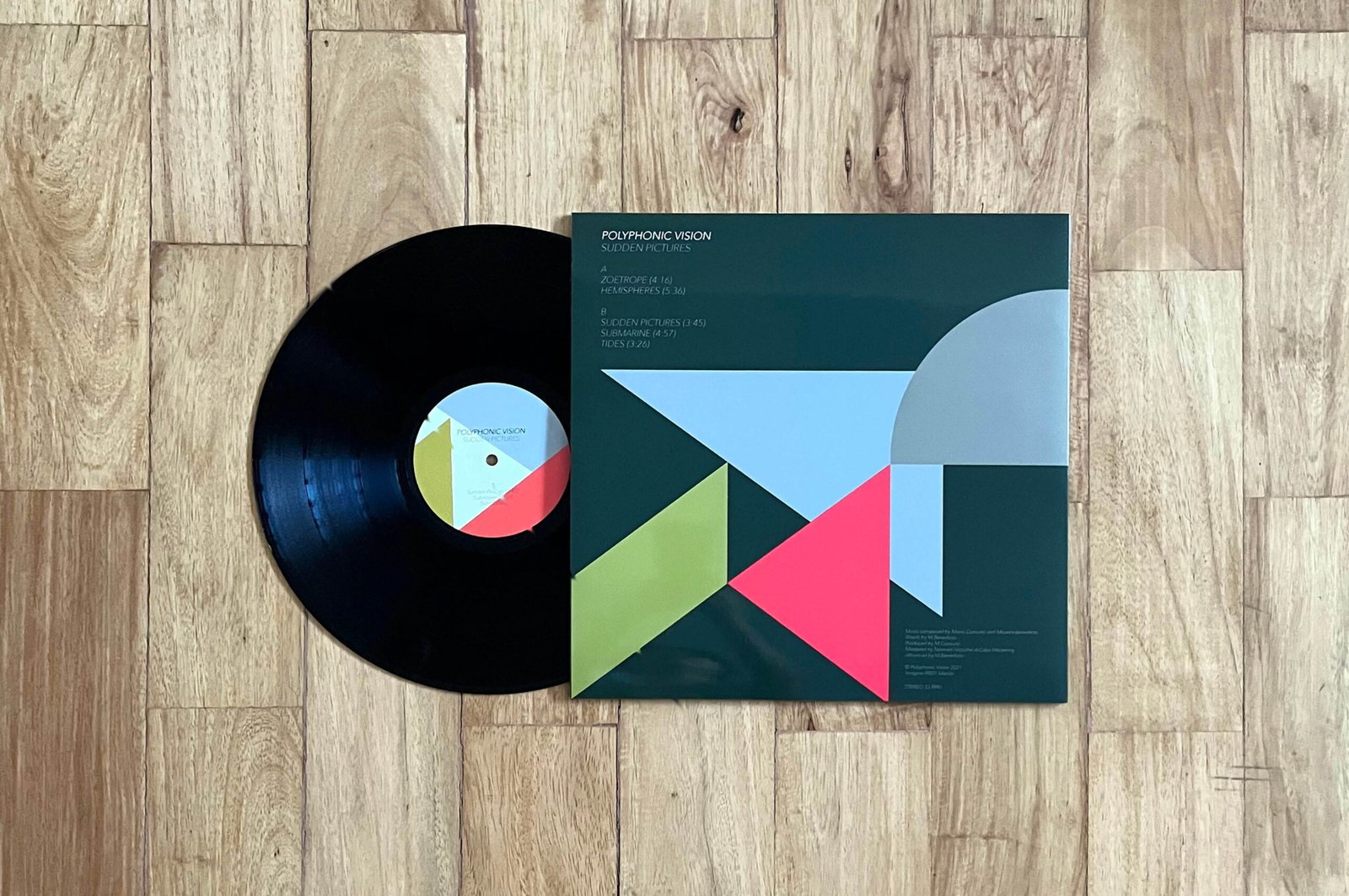 Out of the paranoia and doldrums of the pandemic, comes a sense of catharsis on Sudden Pictures, a five-track EP from Polyphonic Vision—a synthwave duo consisting of Micaela Benedicto (also an architect by trade) and her partner, music composer, and sound engineer Mario Consunji. The EP opens with ‘Zoetrope’, which rolls and rumbles with meandering vocal accents calming elements of tension throughout. The momentum elevates with both ‘Hemispheres’ and the title track, a tale of near loss and holding onto transient flashbacks. The rhythmic percussive energy of ‘Submarine’, in particular, wouldn’t sound amiss on a dance floor. The record ends on a cheerful note on ‘Tides’ giving plenty of reason to look forward to the duo’s next sonic foray.

I caught up with one half of Polyphonic Vision, Micaela Benedicto, in the days before the launch of the EP.

What inspired the sounds you explored on this record?

Micaela Benedicto: When the pandemic hit right at the beginning of us working on the tracks, I think that greatly influenced the sound—the whole atmosphere of the time and just being in this liminal space and imagining all kinds of scenarios. The first track we made, ‘Hemispheres,’ describes empty cities and large distances between people, and between sea and sky. I had also read something about concrete sound mirrors, designed to pick up sound from great distances, which we drew from somewhat. The music track for it was very spontaneously done; there’s a low resonating frequency beneath that sounds like the beginning of a storm. The other tracks pertain to the pandemic too, in various ways. ‘Submarine’ is the memory of an underground art scene we were part of, while ‘Sudden Pictures’ is a near break-up, a collage of fleeting moments.

What was your process in composing the songs?

The equipment we used was the starting point for the sound. Mario got this Space Echo (a tape delay) and some 70s drum machines. We were using our synths and passing everything through the delay. We didn’t really plan to make an album but he had recorded all of our takes and shared the folder with me in early 2020. We had several snippets, none longer than a minute each, and we thought we could make something out of them. I had just started writing the words and melody for ‘Hemispheres’ when the pandemic hit; we worked on the tracks on and off throughout 2020 and 2021, creating some structure out of those snippets and making new parts. We didn’t repeat any recording of the tracks; what we originally recorded is what you hear. We still have a lot of tracks that are unfinished, but as soon as we had enough for an EP we decided to make a record.

What inspired the sleeve design?

We initially wanted to do something DIY and analog. At one point we recorded on a cassette tape and I made a makeshift cover for it using some old-school letter transfers I had and cutting some shapes out of a colored board Mario had lying around. In the end, I just did it digitally but the idea of these cutout shapes remained—I just wanted to have fun with it but create something classic that doesn’t stylistically belong to any time in particular.

What made you decide to release this music on vinyl as well as digital formats?

At some point, we thought it might be good enough to make a vinyl record for. And we really liked this idea that some years or even decades down the line somebody might pick it up.

You mastered and mixed the record in Berlin, and got it pressed in Taiwan. Were there any lessons you learned from this process?

It was Mario’s idea to have it mastered at Calyx in Berlin. He owns some records mastered by them. I think they work mostly on electronic music. The Taiwan press too seemed like a good idea so that we didn’t have to spend too much on shipping from the US or Europe. We’re pretty happy with it. We found out later on that there’s now a local press—we might have done this had we known about it earlier.

What have you got lined up after this release? Any live performances or upcoming releases to look forward to?

We’re already starting to make new tracks. We’re also trying to figure out our setup for live performances—so far we have one at Futur:st on April 20). We’re working with some artist friends on visuals. The first one for ‘Hemispheres’ is by Derek Tumala (which drops at the same time as the EP) wherein he uses these archival cloud-watching photos he found while on residency at the Manila Observatory—this is part of his Art Fair Philippines exhibition as well. We’re also working on something new with the photographer, Joseph Pascual. Right now the idea is to have pictures as visuals in lieu of music videos, something that started with Derek’s ‘slideshow’, and this works perfectly well with ‘Sudden Pictures.’

What have you been listening to lately? Any recommendations for the listeners out there?

I’ve been listening to Laurie Anderson, not just her music but also her recent lectures and some of her writing—she’s incredible. Also, we’ve been digging up some stuff from the early 80s, one of my favorite periods, mostly synth-wave from other parts of the world: Mathematiques Moderne, Taeko Ohnuki, Diseño Corbusier, among others. •

Lawrence Carlos is an architectural designer and urban designer, with a penchant for records.